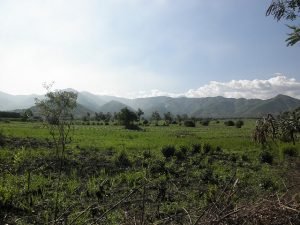 From the heights of the beautiful Rwenzori Mountains in Western Uganda, the farmers in Bukonzo Joint Co-operative Union are pioneering an approach to empower women in rural communities, as well as beginning to fulfill their potential for producing some of the world’s finest organic, washed,  Arabica coffee.  The farmers do not put chemical fertilizers or pesticides on their land, using homemade composts instead. They have both USDA and EU organic certification.

Bukonzo Joint began in 1999 as a rural micro-finance society and has evolved into a union of 5,500 farmer members.  Historically, Bukonzu Joint Farmers produced a low quality coffee for very low premiums. In 2010/2011, Bukonzu Joint Farmers constructed their first washing stations and starting producing a much higher quality coffee. There are now over 20 micro-washing stations producing fully washed coffee that is well regarded by specialty coffee buyers all over the world.

Bukonzo Joint Co-operative Union are proud of the international reputation they have gained for the work they have carried out in coffee growing communities around gender justice. The power in families lies traditionally with men. The co-operative has pioneered the methodology ‘Gender Action Learning System’ (GALS) to involve whole communities in analyzing how couples can be jointly responsible for coffee production and make joint household decisions.

Bukonzo Joint Co-operative Union is inspiring a movement across Africa, and is working with other co-operatives to train them in the GALs approach.